I really can’t believe that Indie Expo Canada 2018 happened three weeks ago. I’m still recovering from an IEC Hangover! If you happen to follow me on Instagram you would have seen my pictures from the day of the event, but today I’m going to round-up everything that happened the day of Indie Expo! I was so excited and honoured to attend IEC as official press again this year! 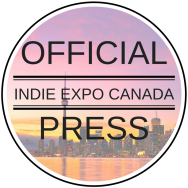 On June 10th, I woke up extremely early for me on a Sunday. Normally, anything before 9:30AM on a Sunday is a no-no for me, but I made an exception for IEC. I had to get up early to catch the 9:15 train down to Toronto; I was so glad this year that the train times were scheduled in my favour. Last year I had to drive and I hate driving into Toronto. So along with my friend, Michelle we boarded the train and we were off!

Our train arrived in Toronto around 11:00AM, which was perfect time for me to attend the press preview. I have to say, I really enjoy the press preview part of the event. It’s such a great time to scope out all the amazing products available to purchase without having the distraction of other shoppers around. We were not allowed to purchase items during the preview, but I did set my sights on some beauties that I came back and purchased later on.

I have to start this with Girly Bits, because without them, this event would not have taken place. Pam Heil is the one to thank for organizing this amazing event. I don’t know how she has the energy to do two back-to-back trade shows, the weekend after IEC she was off to Polish Con New York! You’re a brave, brave woman, Pam! 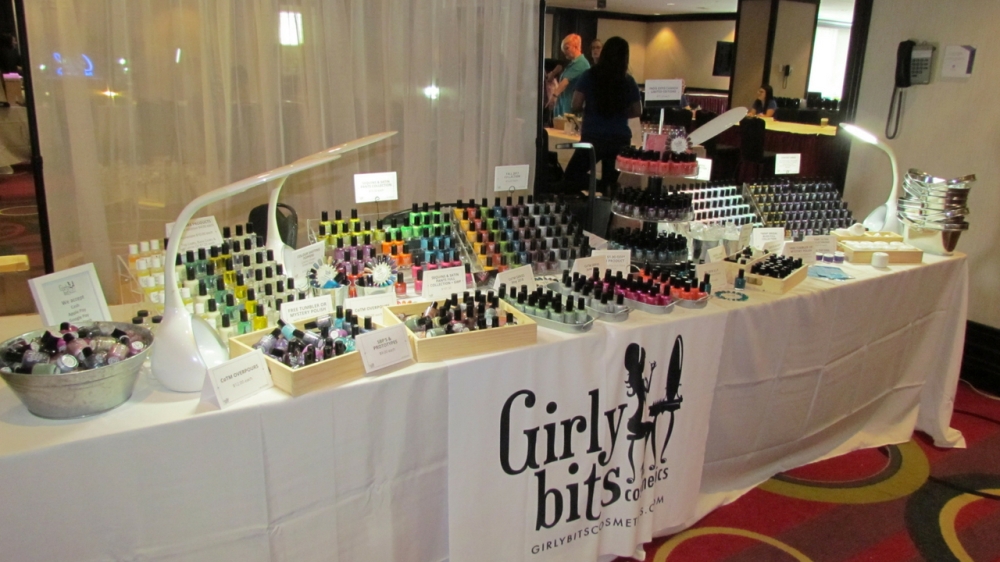 Pam also had a trio of exclusive polishes made for the event and I had to pick up all three. I particularly liked the name attached to the pink thermal she release, because yes, the FOMO was REAL!

The FOMO is Real from Girly Bits Cosmetics

I was so excited to hear that Colours by Llarowe would be returning to IEC this year. Leah Ann has been a staple in the Indie Community since the beginning, back when she was just a stockist. She moved into creating her own beautiful polishes after she could not find the perfect red holographic.

I absolutely adore Leah Ann’s holographic polishes, and after seeing the sneak peeks of  the June Colour of the Month, I knew I had to purchase it. CBL also had a trio of exclusives that were amazing; I love the Canadian names that she attached to them!

This lime green holographic just jumped into my hands while I as at the event; it wasn’t on my shopping list, but I just had to have it when I saw it on display.

Ever after is another returning brand to IEC, although this time Miranda was solo. Ever After was created by Miranda and Rachel back in 2014, but they have gone their own separate ways and Rachel has launched her own brand, Rogue Lacquer. There was a duo between both brands that launched at the event. 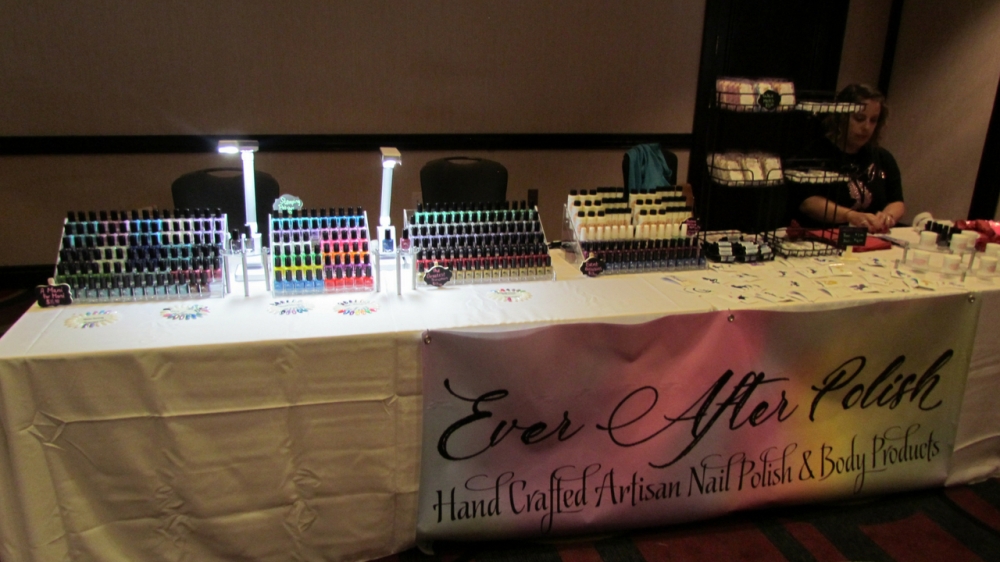 Ever After launched a collection based on the Greatest Showman at IEC. I picked up a few polishes from this collection and they all had fabulous formulas. I also used IEC as an excuse to stock up on some Cuticle Crelly! 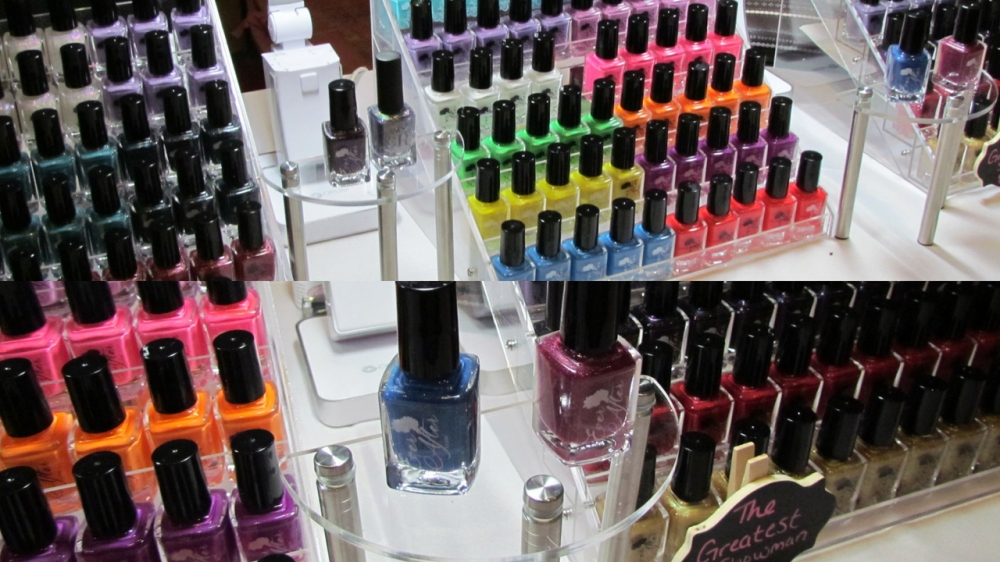 I was excited to see Bee’s Knees in the IEC lineup this year, as they have become a new favourite of mine. At the beginning of the year I owned zero Bee’s Knees, but I now own over 20 Bee’s Knees polishes. This brand took the Indie Community by storm last fall when they release House on Haunted Chill, this polish is still their best-selling polish. Bee’s Knees released half of their new A Court of Thorns and Roses Collection, the second half released at Polish Con. 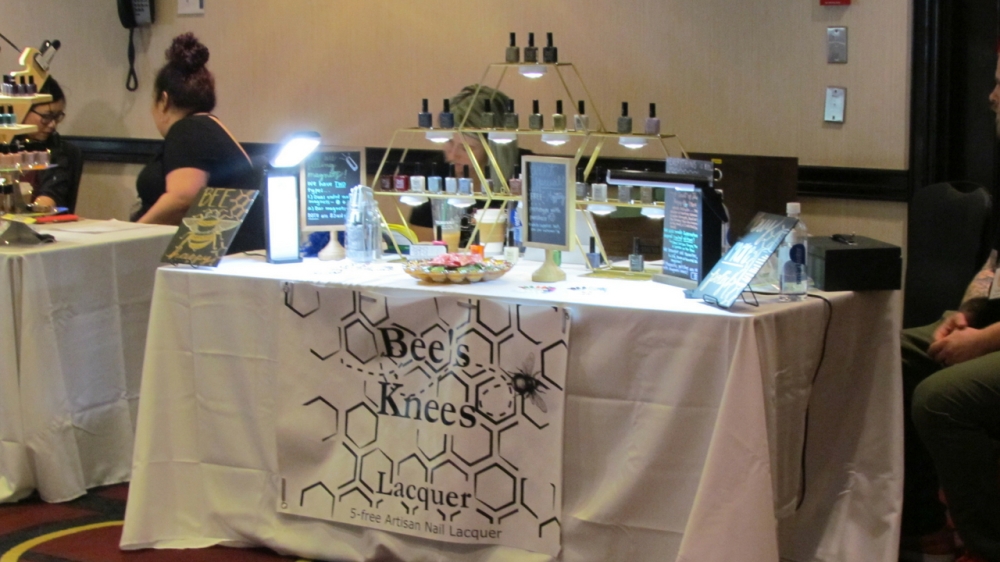 Returning to IEC for the second time, Fiendish Fancies specializes in collections based on horror movies and TV shows. Lara’s newest collection is based on The Handmaids Tale, which is currently one of my favourite shows so I had to pick up the collection.

Lara also creates unique artwork for each of the collections that she creates. She also had her artwork available for sale at IEC. I picked up a magnet featuring Offred from The Handmaids Tale. 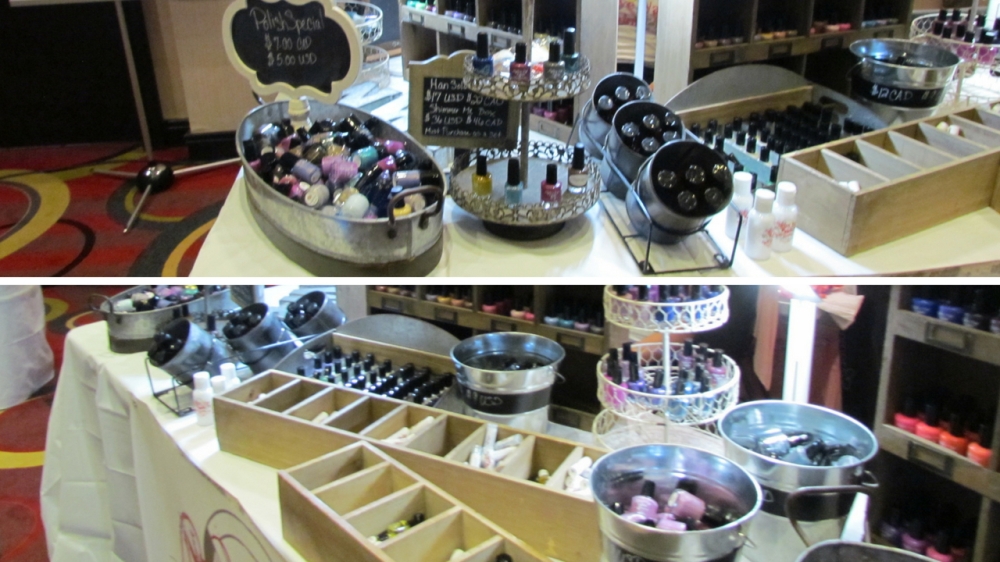 Fair Maiden have been extremely busy over the past year with the success of Polish Pick Up, but that did not stop them from releasing two new collections at IEC. 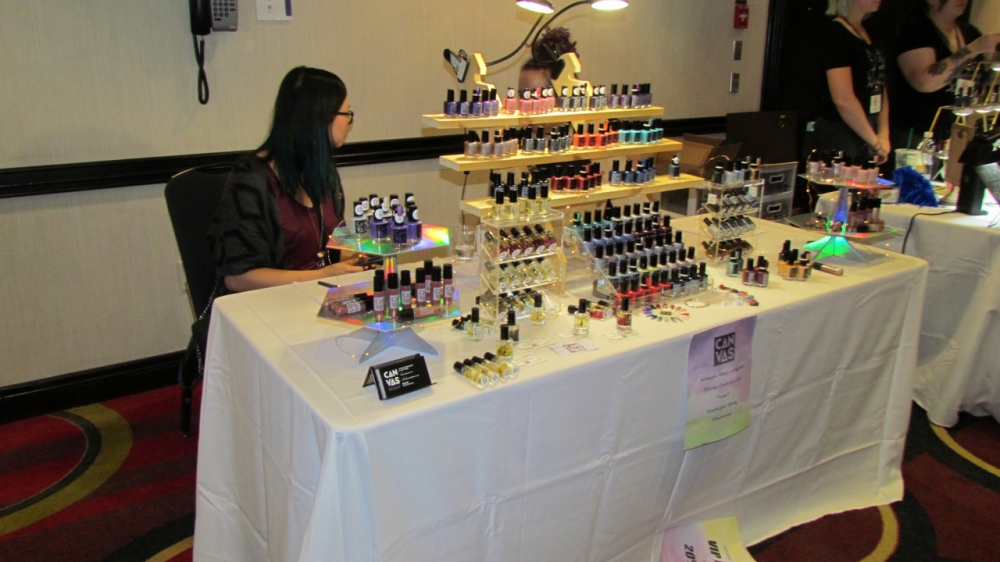 Beyond the Nail was another Canadian Brand attending again this year. They released some new polishes in their Soft Neon Collection at IEC this year, along with some spectacular ultra holo polishes. I picked up both of the ultra holos and they are intense! 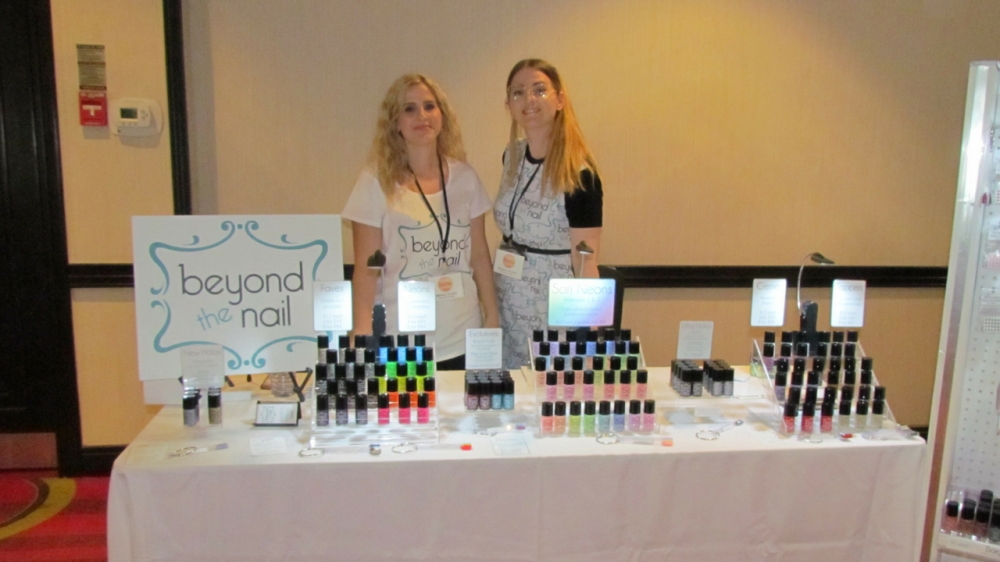 This was the first year for Lyn B Designs at IEC, it was also my first opportunity to purchase some of her polishes. I was excited to see some Harry Potter themed polishes on her table, because let’s be Sirius (lol) I love Harry Potter.

My Indie Polish is another Canadian brand that I have not had the chance to purchase from them before, so I was excited to try this new-to-me brand. I picked up some beautiful thermals for the summer. 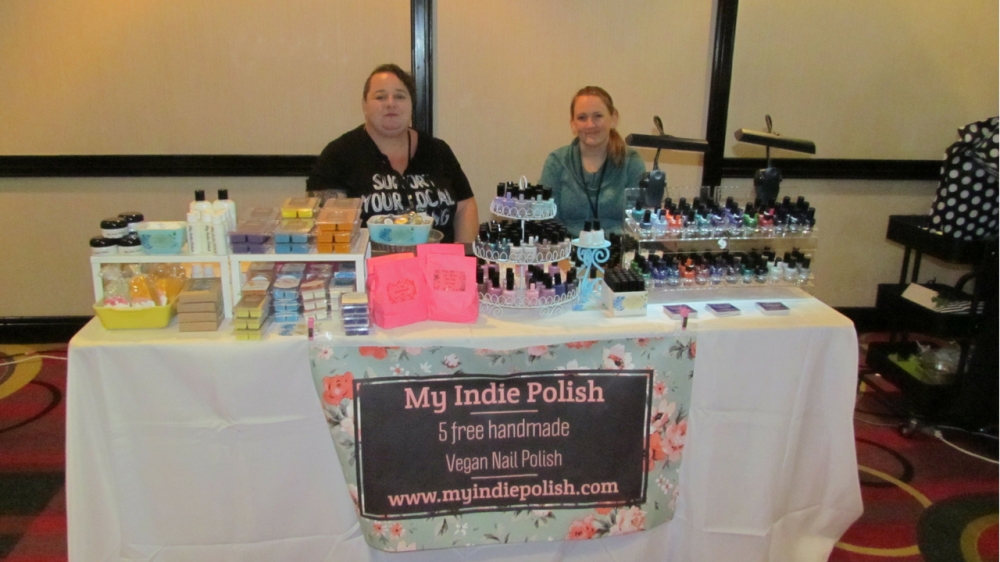 Rogue Lacquer is a new brand that was launched earlier this year by Rachel, formerly of Ever After. Rogue was part of the new Launch Pad area of IEC. I was excited to pick up a couple of polishes from their Spring Punk Fantasy collection, a collection I have been drooling over since it launched.

Alter Ego was another returning brand to IEC. Cynthia has the most uniquely shaped bottles I have ever seen. Alter Ego released a new Jurassic Park themed collection at IEC. 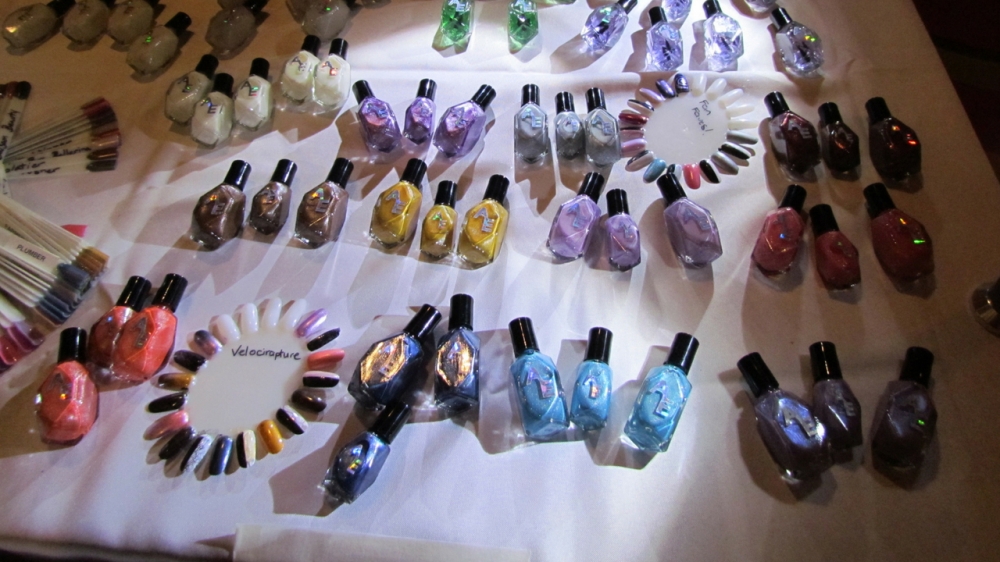 This was the first year for Turtle Tootsie Polishes at IEC. They released some amazing summer foil polishes at the event.

I was introduced to Sammy’s products at last years IEC. I love her cuticle oil and acetone additive, so this gave me the perfect opportunity to stock up. I think I pretty much cleared her out of whatever acetone additive she had left when I made it to her table. It was also Sammy’s birthday the day of IEC. I think that must be an awesome way to spend your birthday as a Nail Polish Addict, among your fellow addicts with a smorgasbord of nail polish!

Indie Expo was not just for Indie Nail Polish brands, there were a number of Indie cosmetic brands and body care brands at the event. One of them being Clionadh Cosmetics. I unfortunately did not purchase anything from their table, but the sample eye shadow I received in my VIP bag was impressive. I will have to save some room in my budget next year to spend at their table. 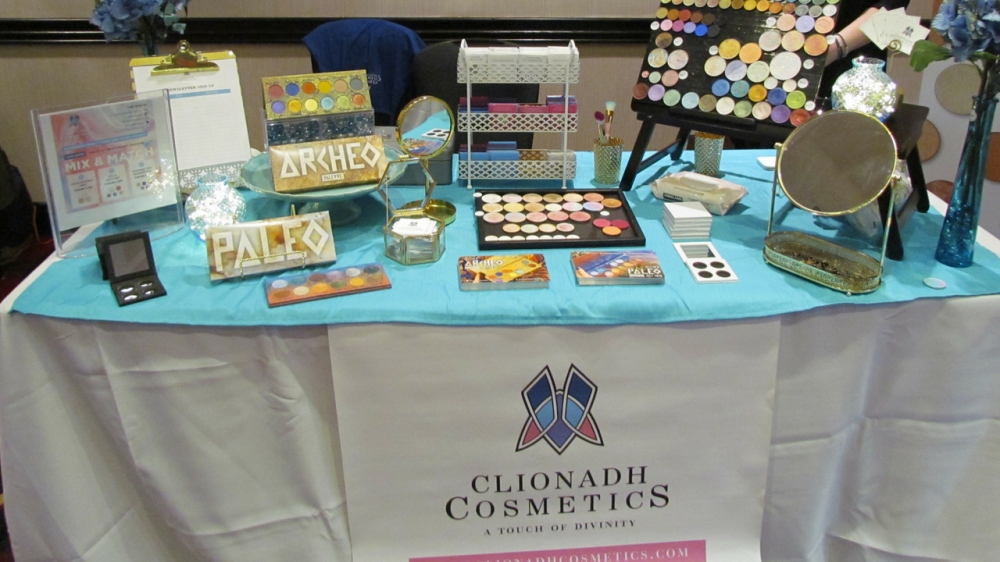 SOGA makes some amazing looking soaps; I’m talking soaps that look like actual cupcakes. My daughter had a blast using the bath bomb that was included in my VIP bag.

Inspired Sense was another brand that was featured in the Launch Pad area of the event. The brand was created by Trish Pilon after she created a nail care kit that helped mend her nails after several surgeries. She also has started making small batches of polishes and she brought some of them with her to the event.

Green Glitter creates biodegradable cosmetic grade glitter. Their glitter can be used on the face and even in nail art!

Thank you so much to Pam for inviting me to attend as press again. I had an amazing time. Now it’s time to start saving again for next year!

Check out my YouTube Channel for more Indie Expo coverage:

View all posts by Lisa Hendy